Artwork for "The Illuminated Heart" 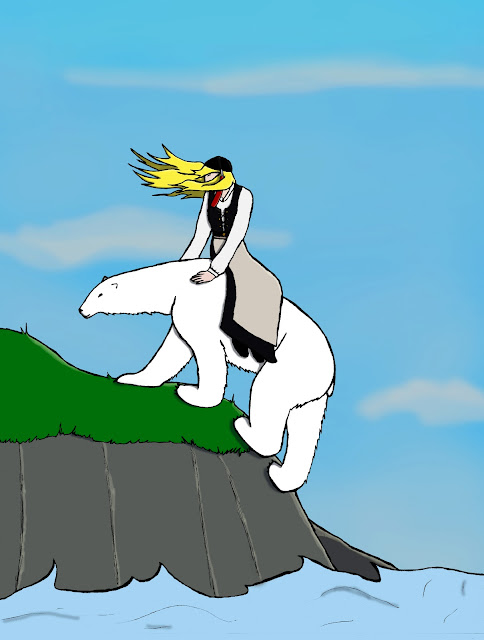 This is art I did for an Indiegogo campaign to raise money to fund my next book, "The Illuminated Heart".

It's also my last bit of art on here until November, because I've finished the Art Every Day challenge (finally). You know, except I did 30 pieces of art over the course of 6 months instead of one. Heh.

Anyways, now that I'm done this, that gives me time to work on that book I mentioned, which I plan to self-publish in May, if the Indiegogo campaign goes well. So far, I've raised $95 of my goal of $500, which is pretty awesome. The campaign ends on May 19th, so, on the plus side, there's still 28 days left. On the minus side, there's only 28 days left. Any help I could get on this would be awesome, and I have awesome stuff for you if you do contribute.

But, yes. If you want to find out more, read the first chapter of the story, and hear me explain the project with my own lips, go to my campaign on Indiegogo.

I hope you have a wonderful summer, full of sun and surprises! :D
Posted by Thea van Diepen No comments:

The Telephone Game on Steroids

I was in linguistics class one day, when I thought of a question, and that question was this: "What would happen if we played the telephone game, but each person spoke a different language?"


Dinosaur: "A jet an aj!" (translation, since that writing system wasn't made for English: "I just want a hug!")
Scroll: "The* saur seems to be speaking in a sad manner."
Horned cave-beast: "What does it mean?"
Stickman #1 (in case you can't read my writing): "This is either a dream, or a really elaborate prank."
Stickman #2 (in French): "What did you say?"

*It actually reads something like "Shuh", but that's because I spelled it wrong and used the letter for "sh" instead of "th".
Posted by Thea van Diepen No comments:

This is basically a rip-off of a wallpaper I have on my computer, but I rather like my version better. :)

Things like this make me think, though, what the world would be like if it were made up of floating islands. How would that even work? 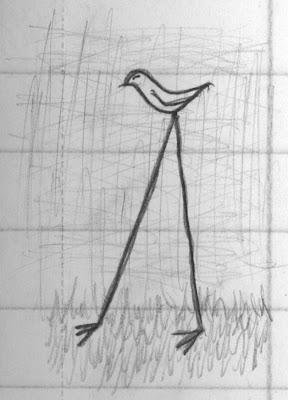 My favourite artist is Salvador Dali and one of the things he's known for is a couple of paintings with elephants and/or horses that have tiny bodies and really long, skinny legs. The Dali Bird was made in his honour.

German Prepositions for the Paranoid Introvert 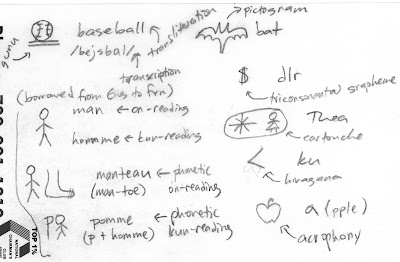 This is literally what I did to make notes for my midterm this semester on writing systems. In case you were wondering, here are what all the random terms on there mean:

Gunu: Slash marks added to a pictogram in order to make it mean something different than the pictogram without the slashes. In this case, I put slashes under a pictogram I made for "ball" in order to specify that it's a baseball. I also put one on a foot to indicate that it meant "toe", and that a picture of a foot without the gunu would mean "foot". This term comes from the ancient and headache-inducing Sumerian cuneiform.

Transliteration: When you use a writing system to write a word (or words) that comes from a language that uses a different writing system. So, like using this alphabet of ours to write Chinese words.

Transcription: When you write a word (or words) using the International Phonetic Alphabet (IPA), which is a fancy-schmancy thing that linguists use to record the actual sounds of languages, without things like weird spelling conventions or non-phonetic writing systems getting in the way. My example for myself was with the word "baseball": /bejsbal/.

On-reading: When a writing system is borrowed by a language that didn't usually use it, there are two different options for reading it. On-reading is when you pretend that the symbols refer to the sounds or meaning of the original language (phonetic on-reading is specifically about the sounds). My example involved pretending that my little pictures were made for English and then French-speakers borrowed them. "Manteau" (pronounced like "man-toe", but with a French accent) means "coat". This term comes from Japanese, because this sometimes happens with the Chinese characters that were borrowed for use in writing Japanese.

Kun-reading: This is the other option for reading a borrowed script, and it involves reading the symbol(s) as if they referred to the new language's meanings or sounds (phonetic kun-reading specifies sounds). In my example, the French word "homme" means "man", and "pomme" means "apple". The reason it works to just add a "p" to "homme" is because the "h" is silent. :)

Pictogram: A picture used in a writing system. My example was a bat to mean, well, bat.

Triconsonantal grapheme: "Grapheme" is the general term for a symbol that is part of a writing system. A triconsonantal grapheme is a symbol that refers to a set of three consonants, like my example of a dollar sign just referring to the three consonantal sounds in the word "dollar" ("dlr"). This occurs in Egyptian hieroglyphs (and two other scripts they had), and these graphemes would refer to entire words because the Egyptians never actually wrote down their vowels. Ever.

Cartouche: The circle that would be drawn around the names of kings and gods in Egyptian hieroglyphs. I made up pictures that would mean my name ("Thea" means "goddess", I kid you not, so the star-thing means "god" and the woman makes the whole thing mean "female god". Aka "goddess") and drew a circle around it. :)

Hiragana: This is one of the three writing systems used in Japanese. Three. All used together, mixed together. Anyways, the symbol on there is actually hiragana, and it's used to write "ku". Like if you wrote the first three letters of "cool" with one symbol.

Acrophony: When the first sound of the name of a symbol becomes the sound that that symbol represents. So, a picture of an apple being the "a" sound.

This bit of my notes here all come from things that Egyptian hieroglyphs used to write things (Sumerian cuneiform, too, but it did things slightly differently. And with a lot more wedge-shapes).

Phonetic complement: A symbol that conveys only a sound and generally one that's already in the word indicated by the previous symbol. Linguists think that this reminded people to read the first symbol as the sound it represents, and not necessarily the meaning it could represent in other situations. in this case, I had a "T" after the picture of a bat to indicate that the picture of a bat is just being read as the syllable "bat".

Semantic complement: A symbol that gives information about the meaning of the word. In this case, I have a picture of a ball to indicate that the bat in question isn't a small, furry animal with wings but, rather, it's a bat like the one we'd see hitting balls in baseball games.

Semantic determinative: A more general term for symbols that do the same thing as a radical.

Differentiation: When one symbol refers to words that sound exactly the same, but mean very different things (aka, homophones) gets altered slightly so that each word has its own symbol. This is done to avoid confusion about which meaning is meant. My example is having the paw print by itself mean "paw", and the paw print with the added radical mean "Pa". As you may notice, English differentiates as well, by using different spellings (although, things like their, there, and they're, or it's and its seem to recently be bringing more trouble than there worth :P).

Abjad: A writing system where each symbol corresponds to a sound, but the only sounds that are written are consonants. Examples include Hebrew and Arabic. The reason my example in my notes is all written backwards is because these writing systems go from right to left, and so I was making sure I remembered that about them.

Mater lectionis: In an abjad, where certain consonant symbols are also used to write long vowels, but never the short ones. Hebrew and Arabic sometimes use this.

Pointed abjad: When an abjad is pointed, that means that things like dots and accents have been used to write the vowels. This is generally done to help teach people to read, or to retain the pronunciation of important documents (like the Torah), or just because someone decided randomly to write the vowels. This isn't done most of the time, though, and the mater lectionis are generally used more, if vowels are indicated at all.

There you go, the highlights from the first half of my writing systems class. I hope that all made sense... if it didn't, and you're curious about it, then feel free to ask me questions. This is my favourite class this semester, and I love talking about these kinds of things. :)

Also, I promise my next post will be lighter on the words. This stuff just gets me all excited. I can't help but tell people all about it! :D
Posted by Thea van Diepen No comments:

I'm taking three language-related courses this semester, which means that some of my doodles are actually on topic. This one comes from the difference between how an adjunct and a complement are diagrammed in a sentence. Which, erm, requires some explanation: 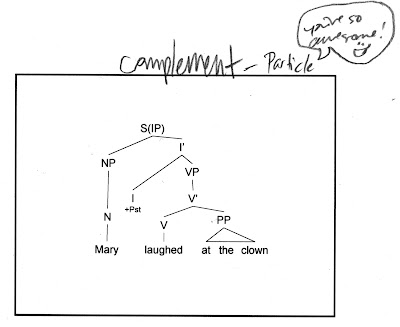 A complement is a phrase (in this case, "at the clown"), that starts with a particle. A particle is a little word that looks like a preposition, but isn't (because a preposition is involved in adjuncts, which I'll explain next), but it acts like a detached part of the verb and, without it, the verb would mean something different. For example:

"throw the cat" vs "throw up the cat"

In this case, "up" is the particle. As you can see, we get two very different meanings.

When sentences with complements are diagrammed, as in the picture above, there is no extra anything on top of V (laughed) to separate it even more from PP (at the clown). I decided that this is because complements are friendly, adorable little suckers that the verb simply can't resist being as near to as possible. 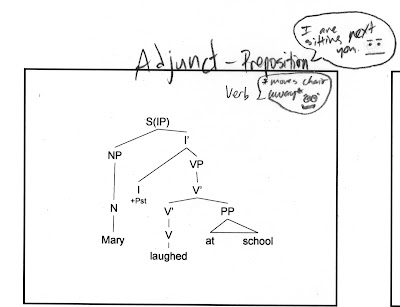 An adjunct, on the other hand, is a preposition, which means that it doesn't affect the meaning of the verb. It only affects where (or when) the verb is taking place. For example:

"cartwheel" vs "cartwheel up a lava floe"

Either way, you're still cartwheeling, and that little preposition is only ensuring that your physical activity gets just a little more dangerous interesting.

When it comes to diagramming the sentence, as shown in the picture, there's an extra level above the V.  It's technically called V-bar, and I haven't the slightest clue how to make my keyboard do it. I decided that, unlike the complement, the adjunct is one of those people who knows exactly what personal boundaries are only to use them in such a way to make you feel as totally uncomfortable as it is possible for you to feel. As a result, the V (laughed) has to put up a boundary between itself and the PP (at the school), and that so happens to be a bar.

How any of this is practical for anyone other than a linguist? I'm still trying to figure that out. On the other hand, you've learned more things, which means your brain is now that much more awesome.